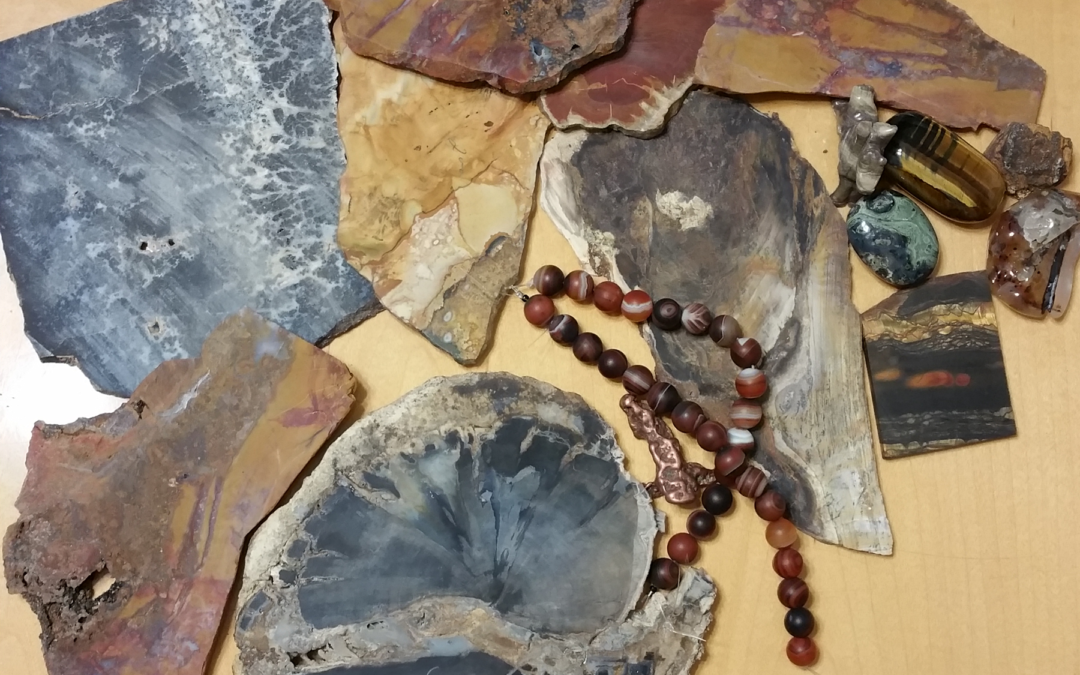 OK, this morning’s ramblings are some notes on why stone for Kisho for my naming for being an artist…

I don’t know exactly why I have the affinity that I have for stone, but it has attracted me since I was a child.

I can tell you that ever since I was really small I have collected stone and rocks, often in the form of crinoid and other fossils. I actually have a secret love affair with trilobites; they make me very happy.

I lived in Southern Indiana where, during the Pennsylvanian Period (~300 million years ago) there existed a shallow inland sea that left lots and lots of fossils in the rock strata. In 1963 the Army Corp of Engineers created a reservoir in the watershed just southeast of Bloomington, which exposed the fossil layer. Now you can go and sit at the edge of the water and gather crinoid fossils and coral fossils and sometimes even brachiopod fossils (clam-like shells). To this day, when Wes and I go to Indiana for a few days, we try to squeeze in a fossil gathering afternoon at the reservoir.

Before I discovered the reservoir, I can remember being around 6 years old and going up into the hills around my house for the first time and discovering fossils and cool rocks. Any kind of stripey rock, any kind of sparkly rock, would catch my eye and end up in my pockets. And the crinoid stem fossils I found became beads.

That fascination has continued to this day. I want to be clear in that it’s not just the urge to collect (although I struggle with that urge constantly). The fascination with stone is more than a magpie response, it’s a fascination both artistic and scientific in nature. You know, in another life I probably would be a geologist. I’m not though, which frustrates me sometimes when trying to identify stones I find and to understand the different components, minerals, and elements that make up different rocks, gems, and fossils. I probably have a decent lay person’s ability to identify – I can make good guesses, but I wouldn’t want anyone (including me) to rely on my guesses.

This fascination with stone, well I wouldn’t say it dominates me, but it is so much a part of who I am, and what I like to do, that most vacations are built around places to go rock hunting. Lucky for me that Wes is happy to indulge me, and that most places where you can find interesting rocks have other interesting features too.

When I think about stone I think about – and this may be odd – but I think that all life, all created things, come from stone. That’s probably not anyone else’s creation myth, but it’s mine… but if you look at a planet – a stone planet like we have – the soil is part of the rock cycle and anything that grows out of the soil is has bits of stone at its core, its essence contains bits of the trace minerals that come from the rocks. Maybe it’s an odd creation myth, but it’s how I see things… that first, for eons, the earth was stone and seas and the wind and rain and sunlight. And while the seas held life, the surface, the stone was barren. The wind and the rain and the sunlight (or lack thereof) and the shifting of the stone itself worked on the barren stone and caused the rocks to break down and become soil and once we had soil we could have life outside of the seas and everything that came from that. Note – this may not be how things actually were, but hey, it’s a creation myth…

So anyway, the fact is that as an artist, stone sings to me the strongest. And along with the stone, I think it’s metal, especially rusted, abandoned, found metal, broken metal, twisted metal, unwanted metal things that draws me in. When you think about it metal comes from stone – all of the ores that we used to create metal come from stone.

The other the other substance I work with a lot is glass and glass is stone repurposed. It starts with sand — pulverized stone — and it’s put through a crucible and is transformed and becomes glass. Glass is stone made shiny.

But sedimentary… well, for me it’s about rest, it’s about being on a path and accepting that path and you are still enough that you actually become the path.

Igneous rocks, those are the ones that are born in the belly of the Earth as molten material – magma. They are the blood of the earth made solid.

Metamorphic rock is a transformed stone. It’s a stone that starts out either igneous or sedimentary and then through a process where great pressure is applied, it becomes something else. The process takes something like limestone and changes it into marble, sandstone into quartz.

You know, stone gets thought about as something that is unchanging – set in stone. Usually, people think of stone as something eternal, something that just is and they don’t recognize that stone is part of this crazy life cycle of our planet. I think that’s a big thing for me – saying this stuff that looks so permanent is really temporary and is subject to all of the same stressors that the rest of us go through. Just on a totally different timeline than the one we experience.

So anyway that’s kind of my thoughts on this early morning.

One last thing – the word petrichor which means the lovely smell that occurs during the first rain after a long hot, dry time. But I like to break it down and twist it a bit: petro (of the rocks), plus ichor (the fluid that flows like blood in the veins of the gods giving them divine, unending life). That’s not exactly the definition, but what the word means to me. When that lovely smell happens around us, it makes me feel like the stones have left us an eternal message that we can only experience by breathing deeply.